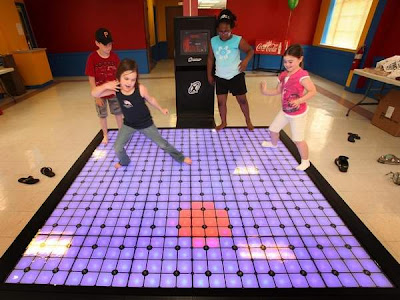 TUSCALOOSA Avery Jones stood tentatively, clutching a red balloon to his chest. His eyes followed a cluster of red lights moving within the floor beneath his feet. He watched the cluster bounce from one side to the next, tightening his grip on the balloon with each change of the light’s direction.

The light continued to bounce until, finally, it set its course toward him. Before Jones could step out of the cluster’s path, it passed under his weight, exploding into tiny green squares.
Avery Jones was out.

This scene isn’t out of a science fiction novel — it happened Saturday afternoon at the YMCA of Tuscaloosa County, where Jones and a host of other children got their first look at “Lightspace,” a game in the center’s new Kids Zone.

After taking the stairs directly ahead of the front desk, the room of red, yellow and blue-painted walls opens up and is filled with video games that kids play with their bodies, not hand-held controllers.

Byron Langdon, YMCA sports director, said the YMCA needed a place that kids between the ages of 6 and 14 could hang out, since they are too big for day care and too young to use the facility’s fitness center.

Langdon said the idea for the new area came from a Chicago YMCA that recently added the same program to their facility with the help of Motion Fitness, a company that sells and installs the games.

After touring the Chicago YMCA, Langdon said he knew it would be the perfect addition to the new Kids Zone. With the help of the YMCA Men’s Club, the idea became a reality.

“Exergame Fitness” came in the first part of April and installed the games and we played with them for a few weeks to make sure everything was working,” he said.

The YMCA’s Kids Zone contains four areas of play. “Lightspace Play Floor” is an interactive floor surface made up of programmable light and pressure-sensitive tiles on a 10-square-foot dance floor. “Lightspace” has eight games, including Dodgeball, which Avery Jones enjoyed, and a game called “Bug Invasion” in which different colored tiles or “bugs” pop up all over the surface for players to stomp on to score points.
The “Makoto” area looks a bit like a boxing ring with three posts. Each post has a number of lights on it that, when lit, signal players to hit them with special gloves or sticks.
Across from “Makoto” are a pair of exercise bikes hooked up to a video game console, which allows players to control racing games with the bikes.

But easily the most well-known area to most kids will be “Dance Dance Revolution,” a popular arcade game in which players step on arrows corresponding to the music and cues on the screen.
Langdon said the games require movement, which helps keep kids in shape. “We’re trying to do something for child obesity,” Langdon said. “You know, all these games are fun, but you’re always moving.” Crystal Jones, Avery’s mother, said her children enjoyed the games.

“It was fun and it’s something that combines play and physical activity. They really enjoyed it,” she said.

Langdon said the Kids Zone is available to members for free and non-members must pay for daylong passes.

The YMCA plans on renting the space for birthday parties and special events.
“It’s been great,” he said. “It’s all active, so any time kids can jump around and hit stuff with sticks and not get in trouble, they’re all for it.”